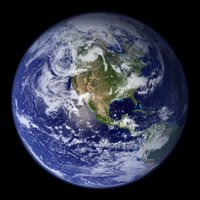 I just got off the phone with a reporter for the local newspaper. He wanted some quotes for an article he’s doing about our congregation and other religious communities responding to global warming. To begin with, I needed to let him know of my lack of expertise in this subject. Undeterred, the reporter pressed me for my thoughts. Clearly, the idea of Christians, particularly evangelicals, concerned about the environment had captured his interest. We aren’t your typical tree-huggers, are we? Too often, conservative Christians have been no-shows in environmental activism, frequently responding with the argument (consciously or not) that “the world’s going to hell in a handbasket and Jesus is coming back soon, so why waste time on the environment—it’s souls that matter.” This is a half-truth. Yes, according to Scripture, this world is passing away and will be consumed in fire prior to the creation of a new heaven and earth (2Peter 3:10-12). However, if we pan out and get the satellite view of the subject, we see that creation and its care should still matter to Christians: after all, it’s the handiwork of our loving God; it’s been tainted by our fall from grace and the victim too often of our sinful behavior; and it’s part of Christ’s redemptive concern as he restores all that’s gone wrong with the world and its inhabitants.

Understanding certain gems from the Book of Genesis helps us sketch our theology of creation and its concern. From the beginning, God creates human beings as relational creatures who are involved in four primary relationships: 1) with God, their creator; 2) with their fellow human beings; 3) with themselves; and 4) with their environment (the earth). The relationship with God comes first; loving God and obeying God freely causes the other relationships to find their proper place and harmony in the greater whole. As we know from Genesis, chapter 3, humankind fell from grace by willfully disobeying God (and, if you think about it, by abusing creation for their own selfish concerns, eating the forbidden fruit as an act of rebellion). The first relationship with God is thereby broken and, like cracks on a windshield, the brokenness ripples outward: the relationship between man and woman degenerates into mutual blame; shame over their nakedness betrays the poisoned relationship with self; and, finally, the cursing of the ground because of their sin shows that the environment itself has suffered because of the man and woman’s defiance. Harmony in the four relationships has been shattered by discord; relational intimacy has been broken by betrayal; original beauty has been pockmarked by brazen self-concern.

The story of the Bible is the grand rescue mission of this loving God passionately pursuing human beings and seeking to restore the lost harmony. God is a rebuilder of relationship: first with himself through his Son Jesus Christ, then between human beings, next within themselves (in psycho-spiritual wholeness), and finally with their environment--as they learn (relearn, really) to exercise proper care and stewardship of the natural world.

Why do we care for our earth? Because it’s the beautiful creation of our generous God, to begin with. We do this because God instilled in us from the beginning a responsibility to tend our earth and care for it (Genesis 1:26-28). We are concerned for our environment because we believe Jesus’s death and resurrection are evidence of God restoring widespread peace to these broken relationships, including ours with the earth. Most important of all, we care for the earth because we’re new. As people of faith, as those birthed into new life by identification with Jesus and his resurrection, we are God's new community, the vanguard, the leading edge of a new creation. To neglect the earth, to cast a blind eye to the environment, is to live in the old order, unredeemed and unrestored. It’s to somehow mistakenly confess that God’s newness is only “not yet” instead of “now.”

Rather than be silent in this growing concern for our environment (a sin of omission, surely), it is time we Christians shoulder our responsibility, roll up our sleeves, and lend a hand.

"Why do we care for our earth?"

One other big reason: because the health of the ecosystem has a direct impact on the quality of our lives! We are radically altering the balance of the ecosystem that sustains us. The further it goes out of balance, the worse it gets on earth in terms of temperatures, weather, sea levels, and food production.

We are biting the hand that feeds us, and it is not just moral or obedient to tend the earth, it is a necessity for sustaining the ecosystem of creation!

Being a Christian and a major tree hugger, I say a great big "Amen"!

We're hoping that Christians everywhere will join in the growing movement toward environmental concern and care with a loud voice. It can be so overwhelming at times when we read about some of the huge issues that face us. But we CAN all just do our share - small step by small step, day by day.

FYI - Bill Moyers has a series called "Moyers on America" (on PBS KRMA Channel 6 in the Boulder area) and on Oct 11 at 8 PM, his topic is "Is God Green". Summary of the discussion is:
"A new holy war is growing within the evangelical community, with stakes for the earth and American politics. For over a decade, liberal Christians have made the environment a moral commitment. Now some conservative evangelicals as well are standing up for the earth as a Biblical imperative of stewardship."

Catch it if you can!

Well, it sounds as if I'm preaching to the choir! Whether one agrees with the thesis of global warming or not, the careful tending of earth is a biblical mandate and a way to love our neighbor, not to mention our children and future generations to come!

Amen to all of the above!

Not tending to the earth allows a great deal of distortions to take place. As we sit idly by a not opposing mega industries spewing toxic waste into the air and water, we condone their actions and in so doing condone further suffering of our fellow beings (Christians and potential Christians) as cancer and other toxic waste diseases rise. The answer is not in the cure, it is in the prevention.

I am somewhat surprised that I have not seen anyone mention the story of Noah in this context. It seems to me that it makes very clear the concern God has for his creation and ALL the creatures in it. The chance of more of them becoming extinct would not be pleasing to Him. His ecosystems were designed to function with all their parts intact. The systems do not and will not function correctly without predators, for instance. I believe that such operations as deliberate mass killing of predators are in direct contradiction to the principles in the Bible. I believe that Christians must pay more attention to our stewardship of his Creation.