Okay, so I joined the ranks of the Twitterati more than a month ago. I'm not sure what inspired this shameless foray into hipness, but I did it. I have six people following me, most of whom I don't know, which is weird. Especially weird when you consider that my updates are 1) infrequent; and 2) boring.

Anyway, I joined Twitter and among the two or three people I follow is cycling legend Lance Armstrong. I feel ambivalent about this, honestly. On the one hand, I've been following Lance in general since his first Tour de France victory in 1999. I bought a Trek carbon fiber bike that year, the same frame ridden by Lance to victory. We have a bond.

Since then, at Christmas, I've been given a VHS video/DVD of every Tour victory of his. I have seven in all. I guess that makes me a fan... I am now following Lance's comeback to pro cycling with mixed emotions. Part of me, as an aging midlifer, is exhilarated by his pluck and courage. His sheer chutzpah. But the rest of me wants to say, "Lance, give it a rest." Focus on your kids, your anti-cancer campaign, something else. It's time for a new leader.

So, I come to his and other "tweets" (those 140 character or less posts that update each Twitter account) with a mixture of curiosity and disdain. I'm interested in his jet-setting cycling lifestyle, his exotic training rides in Hawaii, Nice, and now Aspen. But do I really need to know that he and his kids had a pizza for dinner last night? Do I really care what new shoes Nike has made for him? Or do I need a new angle on his custom Trek Madone bicycle? Give me a break!

Twitter allows us common folk unprecedented entry into the life of the rich and famous. Doesn't Shaq now have more than half a million followers? Hasn't Ashton Kutcher surpassed CNN in subscribers? Sheesh. As "twitterati" we feel a bond with the "glitterati." But give me a break: at some point the sheer banality of Twitter will reveal that they are just like us--and frankly, not that much more interesting. Maybe that's the point. Maybe Twitter levels the playing field and creates the ultimate democracy. But still, there's this amazing arrogance among celebrity Tweeters: they honestly think that we hang on every detail of their lives. And maybe we do. But that's unfortunate.

The fact is, all of us, whether celebrities or simple folk, are uniquely special and we matter to God. So let's beware the arrogance (and the voyeurism!) and realize that God plays no favorites. God loves each one of us.
No comments:

My younger son asked me tonight on the drive home from the Good Friday service, "Dad, is there a name for tomorrow? I know today was Good Friday and Sunday is Easter. What's tomorrow called?" Such thoughtful theological inquiry, and from a nine year-old--I love it!

Tomorrow's called "Holy Saturday" and most of us Protestant Christians don't know what to do with it. Maybe it's a day for Easter Egg Hunts? For setting out the clothes we'll wear Sunday? Or getting the ham or lamb ready for the big meal to come? The more traditional, ancient churches have liturgies and services for this day. But we latecomers to the party don't have much to offer. Maybe that should change...

Holy Saturday commemorates Jesus in the tomb. Really dead. As the Creed says, "He descended into hell." Whether that refers to his complete spiritual and psychological alienation from God (John Calvin) or to a more shadowy "harrowing of hell" in which he went to the abode of the dead to preach to them the gospel, we don't know. What's clear is that Holy Saturday is quiet and unassuming. No anguish like Good Friday; no joyous celebration like Easter Sunday. It's the in-between holiday. Not much goes on. That we can see.

Holy Saturday reminds us that God is still at work even when there's not much evidence. It's like a long winter in which the seeds of daffodils lie fallow beneath the cold, hard soil. Doesn't mean nothing's happening. Just means we can't see it. Sometimes God's best work happens when we least see it. It's then we need to trust that life is pulsating beneath the ground, ready to burst forth in bright colors, if we will only be patient. "Wait for the Lord," the psalmist urges. And so on Holy Saturday, or anytime we can't see God, we wait...and we trust...and we hope. Life is right around the corner...
No comments:

What Makes This Friday Good? 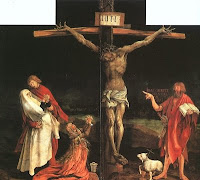 It's a good question, isn't it? Whatever got into the minds of the Church Fathers (and Mothers) who named the day of Christ's Crucifixion "Good Friday"?! How can a day filled with such injustice, torture, sadism, gore, and seemingly, waste be "good"?

This Friday is good only because it doesn't stand alone. In fulfillment of ancient Jewish prophecy, Yeshua is the Suffering Servant of God written about in the Prophet Isaiah, Chapter 53. And, according to eyewitnesses, he didn't just die and be buried. Come Easter Sunday, he rose again from the grave, proving God's favor and vindication and indicating the great turning of the ages: Christ is Risen, He is Risen Indeed! With his defeat of death, life begins to flow, seeping slowly, into our world. A great reversal begins: death will be killed off; sins will be covered; lives will be mended; the poor will be cared for; justice will be served--and a new heaven and a new earth will be coming. This is the beginning of new life. That's good. 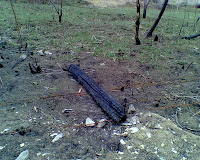 I drove past the North Boulder Olde Stage Fire burn zone today. Right after that scary fire in early January, which burned nearly 3000 acres and threatened numerous homes, I rode my bike through the area. Blackened ground, charred landscape, smoky air filled my senses. It was devastating. Could life flourish here again? If so, how soon? Today, the burn zone is green with new growth--greener, in fact, than the unburned areas around it! What an illustration in nature of how life triumphs over death--and how out of the fires of suffering and devastation can come new life. That's good, too.

Good Friday is good because we have a God who refuses to dwell in a space remote from our pain and suffering. Our God gets messy with our sin, suffers for it, joins us in it, and refuses to let us go. Christ's outstretched arms on the cross are the divine embrace of us all, just as we are. That's really good.
2 comments: