Late to the Party: Some Thoughts on "Breaking Bad"

Just as every cop is a criminal
And all the sinners saints
As heads is tails
Just call me Lucifer
Cause I'm in need of some restraint
(Rolling Stones, "Sympathy for the Devil") 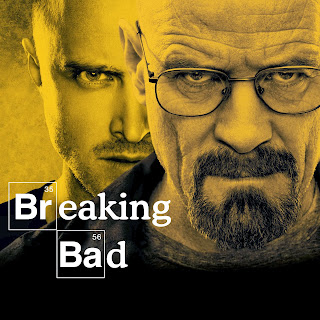 Better late than never. Over the years I've certainly heard the hullaballoo about AMC's Emmy award-winning TV series "Breaking Bad." Heard so much, in fact, that I finally had to find out what it's all about.  Recently, I watched the last few episodes of this year's final season. Not recommended! My older son, who's been a fan of the series for several years, was aghast at my backwards viewing. I don't blame him. But I have to say I was hooked. I get it. I now see what the big deal is.

For the few of you left who don't know about the series, it features a mild-mannered, milquetoasty high school science teacher, Walter White, who lives in the Albuquerque suburbs with his wife and disabled son. Walt discovers he has Stage 3.5 lung cancer (with little chance of beating it) and wants to provide for his family once he's gone. Circumstances align and he throws in with a former student to begin making methamphetamine, relying on Walt's expertise as a chemist to produce a superior product.

We watch the slow and steady descent of Walt's otherwise (we assume) upstanding moral character. He "breaks bad": his choices lead him deeper and deeper into the dark side of society and, more disturbingly, into the dark aspects latent in his personality. This, I think, is why the show is so gripping. We're drawn to identify with Walter White in his sheer normalcy--and in the frightening possibility that, given the right set of circumstances, perhaps we each could break bad. We're forced to ponder the tenuous nature, the fine line, that keeps all of us from a slide into evil. Even more, we're invited to re-examine our categories of good and bad: who's really bad? Is evil the subterranean nature of all human beings? Do our social convention and traditional morality merely paper over a primeval human wickedness which can utterly undo us? That's, I think, what's so scary and compelling about "Breaking Bad."

I've begun watching the show from its beginning. I'm well into Season 1. I'm seeing the subtle erosion (or is it revelation?) of Walt's character. I'm witnessing the little choices he makes to hide things from Skylar, his wife. How he uses half-truths which become habitual. The petty thefts which lead to worse. The coverups and the killings, manslaughter as it slides into murder. Family dinners juxtaposed with gangland underworlds. Gentle married pillowtalk bedded down with violent druglord beatings. Horrifying and fascinating--all of it adorned in stunning visual art, peppered with pop culture, built week by week with excellent writing, casting, and acting.

As a Christian, particularly as a pastor of Spiritual Formation, someone who spends time pondering human character change, I'm asking some deeper questions: what is our human nature at its core: good or bad? If it's good, why is there this tendency in us to "break bad"? If it's bad, why then are we so transfixed by evil, so shocked and revolted? Who are we at our core? And when our best defenses fail against breaking bad, who or what can help us?

And especially for those of us in the church, the so-called "good, moral, upstanding people", how far removed are we from this dark underside of human nature? How deep is our spiritual transformation in Christ? Given the right (or in this case, wrong) set of circumstances, how bad can we break? The Apostle Paul comes to mind in his New Testament Letter to the Romans, Chapter 7. If you've got a minute, ponder it with me:

Paul is writing for us all. He's describing the inner war of human nature: how we can will the good, but face another force at work, drawing us off-track, causing us to break bad. Paul is in anguish: who, indeed, will rescue him, in fact all of us, from this body of death?! Hold on, there's another verse to come:

"25Thanks be to God through Jesus Christ our Lord!" Paul then moves to the great reassurance of his masterful chapter, Romans 8, verse 1:

"There is therefore now no condemnation for those who are in Christ Jesus."

However dark our inner core may be, the light of Christ's love, mercy, and forgiveness are brighter still. We cannot out-sin the gospel of Jesus Christ. Only he has the power to raise the dead and to transform human nature. Only he can change breaking bad into breaking good.