Who are you? Are you your political party affiliation? Your credentials, degrees, education, professional memberships? Are you your title at work? Your role at home? Your portfolio or bank account balance? Who are you?

I’d love to hear your response. And, if you’re a person of faith, I’m curious how that would inform your identity—and, more importantly, where you’d rank it in your response.

In his marvelous new book, The Dangerous Act of Worship (InterVarsity Press, 2007), pastor (and dear friend) Mark Labberton reminds us of the unusual circumstances of Ben Weir. I’ll let Mark tell the story himself:

“Ben Weir, a Presbyterian missionary in , was suddenly taken captive on the street near his home in . He was stuffed into the trunk of a car and driven away, the start of what would be more than sixteen months of captivity. When he awoke the next morning, he was blindfolded and chained to a radiator in what seemed to be a very small room. Ben began to do something he repeated often in those days—he practiced remembering who he was. He would say to himself, ‘I am the same person, child and missionary of the same God, husband of the same wife, father to the same children, professor to the same students.’ He would remind himself, ‘I am the same person I was yesterday. I was not a captive then. Today I am. But that’s the only thing that’s different.’ The circumstances of Ben’s life had radically changed, but his life was still in Christ, just as it had been the day before. He was living in God in captivity. For Ben, this is what shaped his whole experience of being held hostage” (p. 88).

How radically freeing! How often do we, unlike Ben Weir, define ourselves as the sum total of our circumstances? How often do we allow superficialities and situations to determine our core identity? Ben stayed centered because his identity in Christ was big enough and durable enough to define him—despite his setting.

I have another friend struggling with terminal cancer who’s similar to Ben, identity-wise. She refuses to define herself as a cancer patient. That’s not who she is, not at her core, at least. She’s a disciple of Jesus, a beloved daughter of God through faith. She’s been baptized and given new birth in Christ. These unseen realities are who she really is. They’re bigger than chemo, prognoses, and illnesses. That’s who she is. Who are you?

Learning How to Eat 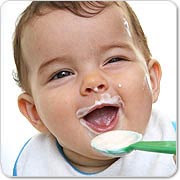 Recently, I was speaking with a new parent about feeding babies and baby food. I confessed that, years ago, as a new parent, I actually enjoyed stealing a taste of Gerber’s sweet potatoes. Even now, the thought of that goopy orange sweetness makes my stomach rumble. But I digress…

Our conversation touched on how, as parents, we go through a journey with our children and their eating. First, for the mother, it’s providing milk through breast-feeding. Soon, formula and bottles are the way to go (and the dad gets to take part!). Before we know it, it’s rice-based cereals, other forms of baby food (including blessed sweet potatoes!), and finally, solid food. My wife’s East Indian upbringing introduced her to the special celebrations families have in that culture when the child is first fed solid food. I guess my point is that there is a continuum of feeding, a growth curve of learning which moves toward independent eating. Over time, the parent coaches the child in his or her eating habits, encouraging wise nutritional choices, so that, in the end, as the child matures, he or she becomes self-fed. Can you imagine what it would be like to have to spoon-feed a healthy teenager pureed sweet potatoes?! You get my point.

Spiritually, it’s not all that different. People are re-born through faith in Christ. At first, as spiritual infants, they’re fed the milk of basic Bible instruction. Soon, we hope, they graduate to solid food and the “meat” of more mature spiritual formation. Sadly, this doesn’t always happen! (see Paul in 1 Corinthians 3:1-2!) In a recently-published pamphlet by the Willow Creek Association, a study of that vast congregation (as well as several other churches) revealed that the Church often does a poor job teaching Christians how to be self-feeders. Church attenders too often rely on the church and the weekly sermon to be their primary spiritual food. If this is the only eating opportunity, is it any wonder that Christian maturity may be stifled? We (especially those of us who help a congregation pursue spiritual formation) must reconsider how we’re helping people learn to feed themselves. Are we providing instruction on the Bible and how best to pick its low-hanging fruit? Are we offering a balanced diet of learning that provides healthy nutrition and models good feeding practices? Most of all, are we urging people to take responsibility for their own eating habits?

I suppose that many of us have heard Christians complain after sermons they don't like, “I’m just not being fed.” That’s high chair Christianity, isn’t it?! It’s time for all of us, pastors and parishioners alike, to move toward independent eating and good self-feeding. Let’s ditch the bib and baby food and fire up the barbeque!