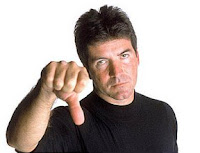 Okay, a seasonal confession: I'm hooked on American Idol...again. This year the gals are much better than the guys and so far, most of the voting has reflected the reality of people's talent (or lack thereof). The judges, Randy Jackson, Paula Abdul, and Simon Cowell, are part of the fun. Randy's faux street cred ("Dawg!"), Paula's banal co-dependent kindnesses, and Simon's dry Britishisms create a mix that is by turns warm and caustic, kind and withering.

Simon is growing on me and here's why: in a culture of relativism, grade inflation, and political correctness, where the truth dare not be told (and where truth is discredited as merely the product of one's power, culture, or history), Simon's no-holds-barred responses to performances are refreshing. Simon tells it like it is. He's unapologetic. He gets it right. Sure, he could candy-coat it. Sure, he's often harsh and occasionally mean-spirited. But I appreciate his independence and unapologetic defense of reality. If you want the bracing truth, he's your man.

Of course, for those of us who seek to follow Jesus, we've got to take it a step further: how do we speak the truth, but do so in ways that are loving and helpful? "Speaking the truth in love," was St. Paul's motto. I'd like it to be mine. Dawg.
8 comments: