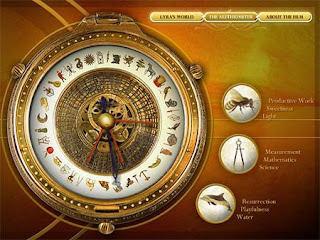 Things on the church staff email are heating up these days about the soon-to-be-released movie, The Golden Compass. Seems it's a children's fantasy flick whose aim is to undermine Christians, the Church, and ultimately God. According to snopes.com, this is no urban legend burning its way through cyberspace; this is apparently the real deal. I confess that when these types of movies come out (see below with The Da Vinci Code and The Last Temptation of Christ), my eyes glaze over and I groan a bit. "Here we go again," I mutter. Too often, I feel, Christians respond reactively, combatively, and frankly, obscurantly (I think that's an adverb). Once more, we get known for what we're against, rather than what we're for. And often, we don't get the hearing we deserve. I'll wait to render a verdict on this latest challenge (and opportunity).

For the time being, let me just make one observation: if The Golden (my fingers keep inadvertently typing "Godless"!) Compass is all it's cracked up to be, then we have one more very powerful example of the way popular culture, particularly the realm of movie-making, is now being used to attack Christian values and wage spiritual warfare. The main battlefield is no longer the university or print media; it's the movie theatre. This raises a question: how well are we Christians responding in this arena? I'd say fairly well, actually: The Passion of the Christ, the Nativity Story, The Lion, the Witch, and the Wardrobe of the Chronicles of Narnia, these are all significant and worthy efforts--ones which may've heated up this recent salvo in response.

Popular culture is the place to engage, don't you think? Certainly, we keep after things in other areas, but this key realm is a golden opportunity, isn't it?

Let's watch how we Christians respond to this latest challenge...will we be known for our reactionary, strident responses--or something more creative and thoughtful? For a solid assessment of The Golden Compass from a philosophical viewpoint, check out: http://www.movieministry.com/articles.php

Thanks for the link, Carl, I'll have to check it out. I read the books and thought Pullman was quite didactic, especially in the Subtle Knife (Book Three). The first two were a rollicking ride, but the third read like a thinly veiled atheistic tract.

what do i think about the compass? it's a movie. it's not real. i have no problem with atheistic tracts in america. the same freedom is allowed to all people to express their views in the free marketplace of ideas.

i really believe the phrase "there's no such thing as bad publicity". looking back, movies like The Last Temptation of Christ and The Davinci Code were feared by some in the church. in reality, these films catalized fantastic dialog about what the gospel is really about. what damage have these films really done to the eternal glory of god? god is so much bigger than a movie, or a song, or even a cross.

i think films like this are great. if we can't dialog substantively with ideas of our day, we should crawl under a rock somewhere.

also, while like the idea of making culture that can compete in the marketplace of ideas, i don't think god needs that in order to accomplish his mission of reconciling the world to himself.

in my mind, folks who are trying to stir up trouble around these movies are nothing more than chicken littles.

Mitali and John,
Thanks for your comments! I sense I'm not alone in my moderated response to this film--and I'm glad to be in such thoughtful company!

Movies that seemingly counter God bring great opprtunity for conversation about God and His existance. I read that the author of the Golden Compass wrote it because he wanted to directly counter CS Lewis' Chronicles of Narnia (they were written about the same time). God is so great. He brings controversy about so people will perhaps explore His existance. How great that we live in a country that allows all avenues to seek our maker...even the questionable and seemingly lost and opposed atheist is under Gods watchful eye. I agree with John, the Christians that will boycott this movie simply lessen the opportunity for drawing people closer to the God that desires for all to know Him one way or another and are taking a low road that thwarts commmunication. Just a thought... I think jesus would watch the movie and then have healthy conversation!

These are good thoughts, revealing the best of our Western tradition of open inquiry and a level playing field on which ideas may compete. Beneath this is a God--and a gospel--which will not coerce, but only woo, preserving human freedom to choose (John Calvin, forgive me for now!). Thanks for reading and expressing your thoughts!

I remembered growing up in a family that adores camping so at an early age, my siblings and I were taught by my dad on survival. The first lesson was compass reading, followed by map reading, pitching a tent, starting a fire from scratch, and filtering water among others. My dad is a great teacher and today I'm passing on what I've learned to my sons who are eager beavers when it comes to camping. If you need information on how to use a compass, see this resource page: http://backpackingmastery.com/basics/how-to-use-a-compass.html

Thanks for sharing Send Flowers To Dubai


Amazing Blog .I loved it. Thank you so much for Sharing with us. send cakes to Pakistan.