Cycling as an Image of Sacrificial Service 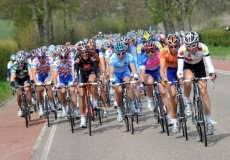 I enjoy reading Boulder local and High Road cycling professional Michael Barry's writings on the VeloNews.com website. He's thoughtful, articulate, and, if I may say so, deep! Today I stumbled on his article, "On the Domestique Life." A domestique in pro cycling is literally a "servant", a helper who sacrifices his own personal glory for the success of his team and especially his leader. Barry gives great insights into the unique privilege it is to lay down your life for your friends, something Jesus spoke of as the pinnacle of love. Granted, this is just cycling...but there's more to this, a parable of sorts. This is a "crossroads" insight, and so I share it in full, hoping you find it interesting, if not challenging.

"Cycling dynasties are built around one or two leaders and a team of domestiques who are willing to pedal to the death for their leader. Faema, Molteni, Flandria, La Vie Claire, Systeme U, Banesto, ONCE, U.S. Postal all became dynasties, not only because they had leaders who could win the biggest events but also because those teams included a core of riders who were strong enough to perform but sacrificed their own chances for the leader and, above all, for the team.

During the Amstel Gold Race [a recent Dutch one-day classic] I spent a good portion of the six hour race on the front pulling, setting the tempo and chasing a breakaway, with four other riders—all of us from different teams but all with the same goal: to set up the race for our leaders. I love riding on the front for a teammate and learned how to do it properly in my first races with US Postal in 2002.

Johan Bruyneel and Lance Armstrong built a team of domestiques that were of the highest caliber. Chechu Rubiera, Pavel Padrnos, Jose Azevedo, Matthew White and dozens more sacrificed themselves for the team knowing that it was not only their job but also an honor to ride for a champion. And, the team won as the leader knew he had the support of his men giving him confidence and positive pressure going into the final. When riders sacrifice and give themselves completely to the team it puts the leader in a position where he doesn’t want to disappoint.

George Hincapie’s finest moments as a cyclist have been while guiding Lance in the Tour, perhaps also the moments he should be most proud of, and certainly the moments he will be remembered for as a cyclist. It is one thing to win but an entirely different thing to devote yourself to someone else’s dream ─ for seven years with Lance and an eighth with Contador ─ and to sacrifice your dreams for that. Dynasties are made on selfless efforts of individuals striving towards a common goal and the sport’s greatest champions all had men that would ride at their side, until their death for that goal.

In Amstel, I sat on the front for hours pulling with the four others and not seeing much of the rest of the peloton [the main group of cyclists] except for when we went around a hairpin and saw, in our periphery, the tail end of the group rattling away behind us. A small acceleration on the front is ten times harder at the back as the serpentine peloton whips away, the back end being the tip of that whip. There is a pleasure in knowing that with every effort we make the others behind are suffering as well, often more than we are up front.

Amstel is a great course to ride on the front of the peloton. We could feel the crowds’ emotion, see their faces, hear their screams, and smell the beer, sausage and frits. This year, the weather was ideal, sunny and warm, so it seemed all of Holland was out to watch and soak up the sun, the beer, and the race. The course is hilly with what seems to be a corner every kilometer—so, the race is much easier on the front as we could shoot through the corners, set our own speed on the climbs and avoid the panic in the peloton that spills over into the grass ditches, sidewalks and bike-paths as everybody fights to get into a good position for the next difficulty. Ironically, the difficult sections on the course become the run into the climbs and not the actual climbs as the fight is harder than the acceleration on the ascent.

Prior to the race I had a sleepless night as my throat was sore and when I got up for breakfast the doctor diagnosed the inflammation as strep throat. I was told to ride 100 km and to pull over in the feed zone and call it a day. It was a better option than sitting in the hotel all day alone. I agreed; but as the race began I realized my legs were reasonably good and that I could likely go further than the predetermined 100 and do my job for the team. Prudence told me to stop when the doctor had told me but my legs, the race, the moment, all told me to keep going at least until the second feed zone at 180 km.

The emotion, ebullience of the crowd and my legs carried me just beyond that, for another twenty kilometers or so, until the final action where riders began to ignite their attacks in front of our foursome on the front, quickly pushing us into the middle of the bunch and finally out the back. It didn’t matter; my legs were done, my work was done and I found my way back to the team bus with one of my companions from the chase, Caisse d’Epargne’s Vincente Garcia Acosta, or “Cente.”

Cente knew the quickest way back but it didn’t seem short enough. My legs were sore and my entire body ached; now that I was no longer in the race every little ache was more noticeable as I could focus on it. My throat hurt intensely, and my muscles twitched as we slowly rode, against a fierce headwind I hadn’t noticed before, back to the bus.

Cente and I chatted about our kids, life in Spain and racing. During our four hours on the front we had somehow developed a bond in that we were both committed to the same goal and had worked together to get to that point; he had given me food during the race when I was out, and in the front we had somewhat nursed each other like teammates to reach our goal. We chatted about riding on the front and he told me how he enjoyed it, how it was his job, he was hired to do and did it because Valverde trusted him and respected that he would give everything for the team.

He told me the new younger generation didn’t understand what it was to ride for a leader and that they all thought they would make the final, none wanted to ride on the front, or do the domestique’s work—and few respected it. He said he was always the first to put up his hand for the job although he has a palmares better than most.

The television audience might only see Cente on the front for the first hours of the race but he is known in the peloton universally, for his strength on the front and for making everybody scrap for some draft as he pedals convincingly up front.

In a quantity over quality society where most dream to be an overnight superstar, a flash in the pan American Idol, hard work has been devalued. A few nights ago, I finished watching the Beatles musical movie “Across the Universe,” and there was a great quote from the protagonist, Jude. The dialogue at the dinner table unfolds between three people:

“What you do defines who you are.”

“No, no Uncle Teddy. Who you are defines what you do, right Jude?” Maxwell replies.

“Surely, it is not what you do, but the way that you do it.”

Thank you, Michael Barry, for illustrating a truth we know in Jesus Christ, the ultimate Domestique, the one who came not to be served, but to serve and to offer his life as a ransom for many.

Carl, you're right. Barry is a good writer. So, are you. To be content to always be a domestique takes something special and is truly admirable and Christ-like.

Aw, shucks, Steve! I love cycling for its many metaphors, don't you?