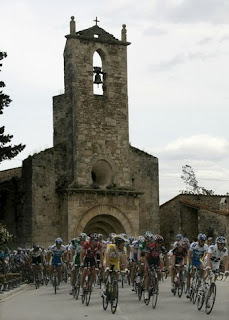 I'm grateful to a churchmember who shared with me what I think is a great article blending many of the loves that motivate this blog. It's a "crossroads" article for sure: an intersection of simple quiet Christian ministry and the sport of cycling. I find it particularly helpful in this time when our church is wrestling with ways to be missional from the grassroots up. There are so many ways we can make Christ's love real--and here's one. Hope you enjoy it!

By Kathy Hanks - The News - khanks@hutchnews.com

For years, has kept a secret.

But that's how silent ministries work.

During the summer months, families in the neighborhood might have noticed bedraggled strangers showing up at the red brick building. They'd arrive on bikes during the early evenings. Then leave early the next morning, appearing clean and refreshed.

What many people don't know is that for the past 36 years the small church at the corner of and has been a welcome refuge for exhausted cyclists crossing the country.

Listed on adventurecycling.com, the church basement is certainly not a five-star hotel. But the bike hostel offers a roof over cyclists' heads, air-conditioning, beds with clean sheets, a shower and even a kitchen to cook a hot meal.

Reservations aren't necessary. All a cyclist passing through must do is stop in at Harley's Bicycles and pick up the key.

The church charges nothing for the service, though some leave a donation. All cyclists have free rein of the building.

"There is definitely open trust," said Harley Phillips, an avid cyclist and former owner of the bike shop that shares his name, and a cradle member of . "It's a no-pressure thing. You come and go, and do what you want."

The silent ministry began during the nation's Bicentennial Celebration, which inspired a bike-across-the-nation movement.

The church is five miles off the transcontinental trail, and so is the bike shop. Because there aren't too many bike repair shops directly on the route, Phillips said the cyclists would stop in. At the time, the church had a two-story parsonage next door that wasn't used during the summer. The congregation decided to open it up for the travelers. They added more beds to the upstairs bedroom, and the church ladies agreed to wash the linens.

"It turned out to be a wonderful outreach for the church," Phillips said.

When an addition to the church was planned, the parsonage was torn down. Now, the cyclists stay in the church basement.

The Rev. Henry J. Hartman said the church was allowing the Holy Spirit to work through its members by touching the many lives of people they didn't even know.

"This is what I call a silent ministry," he said. "And we perform other acts of God's love that others don't know."

The congregation's willingness to open its building has touched numerous strangers. Most they never meet. However, many sign the guest book, leaving addresses from all over the globe.

The role the church plays is more a spiritual thing than religious, Phillips thought.

"The Holy Spirit moves in strange ways," he said. If visitors happen to be there on Sundays, they are welcome to attend the service. But it's not mandatory.

"We've had very little abuse over the years," Hartman said.

There are tons of stories, Phillips said.

Once, a cyclist had to stay a week at the church because he broke the frame of his bike. After completing every "honey-do" the church ladies could think of, he went to the unemployment line and found a couple of days' work to stay busy.

Another time, the church was planning a baby shower and a cyclist's clothes were scattered around the fellowship hall. Quickly, they were moved behind a curtain.

"There is uniqueness about the riders. They are all terrifically different, yet they have one common denominator. They are all self-reliant; consequentially they will deal with anything."

Such as rain, winds, searing heat, hills, mountains - all that and more as they ride across the country.

"They teach us," Phillips said.