Cellphones May Be Dangerous to Your Health 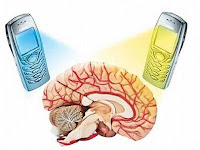 Yesterday I had lunch with a friend in the medical profession. We got to talking about the effects on society of digital technology. I shared with him my funny sci-fi idea: "Wouldn't it be weird," I said, "if we found out that the microwaves emitted from our cellphones and wireless technology had a bad effect on our health? Man, that would change everything, wouldn't it?! Kind of like the thesis in Mary Shelley's Frankenstein."

Then my friend replied, "Funny you should mention that." Watch out when someone says that. He said he'd just read an article in GQ, a fine, scholarly journal I have been known to read at the barber's. It pretty much alleged the same thing. Here's the link so you can read it yourself:

He also mentioned that since reading the article, he'd shut off the wi-fi in his house and only uses a wired earpiece when speaking on his cellphone. This is a sane, level-headed doc. It's given me pause. And it may be bumming me out. After all, I'm an iPhone afficionado now! Read the article and let me know what you think!

I gather that physicists who understand microwaves are pretty skeptical of this. While I don't think it has been totally discredited like some alleged links (such as the scare years ago about cancer from power lines, or the more recent scare about vaccines and autism), I wouldn't worry too much about it (easy for me to say since I don't own a cell phone).

The biggest health hazard of cell phones is people who use them while driving!

Hmmm...it will be interesting to see how the research develops around this and, just as interesting, to see who does and doesn't sponsor it! Staying tuned...

this website is something that is needed on the web, someone with a little originality. useful job for bringing something new to the internet! cara mengobati eksim kering