Some Flavors From "A Taste of Italy" 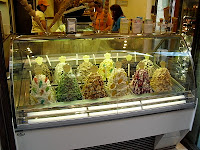 Last night, my family and I returned from 10 days in Italy. It was a great trip--we made all our connections on time, had good weather, stayed healthy, and managed to end the trip still liking each other. We're thankful. Now, while the thoughts and impressions are fresh, I'd like to share them with you. Consider this your own little taste of what we enjoyed. Italy for us was a flavorful buffet, a feast of experiences to whet the appetite for more extensive indulgence at another time.

I find foreign travel to be stretching: it introduces new rhythms and it expands our views of the world, ourselves, and God. Pulling us out of our comfortable, familiar routines, travel abroad requires us to trust God in ways we might not while home. Having said that, it isn't always easy and it's not necessarily convenient. But for us, it was well worth it.

Getting off the plane in Rome, hearing the melodic lilt of Italian, puzzling through the unfamiliar signs and advertisements, all of it induced the thought: "It's good to be overseas again." I'll spare you the travelogue. But here are some quick tastes for your sampling...

Touring Italy, much like my recent trip to Sonoma County in California, epitomized the divine-human harmony of good stewardship of the land. You observe how carefully the Tuscans cultivate their olive orchards and vineyards and it's clear they respect and rely upon their rich, fertile soil.

Rome's modernity competes with its history. Traffic surges around the ancient city's Forum, Colosseum, and Pantheon (the only building on earth used continuously for over 2000 years). Wherever one turns, Rome reveals layers of proud history, reminding us how fleeting is our pursuit of power and fame. Ancient Caesar's glory is modern Roman rubble.

More than once I was reminded of the faithfulness and courage of early Christians. A prominent cross stands at one of the entrances to the Colosseum floor, recalling martyrs who gave their lives for Christ in the sadistic Roman "games." We visited the Church of St. Peter in Chains and saw the handcuffs used to lead the Apostle to his execution. We were also humbled by the symbol of the way he was killed (the upside-down cross).

"La Dolce Vita", the sweet life, is so much a part of Italy. We sampled and savored good food, learned to linger longer over our meals, drank surprisingly consistent (and cheap!) espressos and cappuccini (plural, you know). The Italians appreciate quality, if not quantity (no super-sizing here!). Fashion and style were everywhere (challenging us to take just a little more care in the way we present ourselves). A few examples of our compatriots' cultural insensitivity recalled to us the importance of being a good ambassador abroad--for our country, certainly, but also for Christ's kingdom. And, coming from a land of increasing cultural homogeneity, Italy's regional differences impressed us.

What sites will stay with us? Michelangelo's David in the Florence Accademia we found surprisingly moving. The great sculptor captured the beauty, strength, and vulnerability not only of the human body, but also of young David preparing to battle Goliath. David's knit brow, the veins on his arm, even his extended lower torso (inhaling as he readies for the fight?) were utterly captivating--and all in marble. If "man is the measure"--the slogan of the Renaissance which inspired Michelangelo's work--it's nevertheless man's Creator who gets the credit for the beautiful crafting of our human bodies.

We spent a day traveling to Naples and Pompeii, where we saw the dramatic destruction of an entire first century town by the eruption of Vesuvius (still active and potentially menacing). While it was fascinating to walk the streets of the city, I was struck by the scale of the tragedy (a whole town and its inhabitants buried by ash mixed with rain, paralyzed in the positions in which they perished).

We spent the last few days in Venice, which is predictably romantic and surprisingly smelly. As travel guru Rick Steves observes, Venice faces a modern dilemma: its island isolation (there are no cars of any kind) makes it cost prohibitive for locals to live. It's a city slowly sinking into the mud and facing constant need for renovation and modernization. Will Venice become a tourist's Disneyland, Steves wonders?

Finally, one aha for me was learning that the form of the cross-shaped Christian basilica was based on the prior pagan architecture of the most prominent building in town, where magistrates gathered to hear cases and convene meetings. This goes to show you that the church has been interacting with secular culture since its beginning, interweaving its own values with cultural forms and styles familiar to the people of its day.

A postscript: gelato. I had no idea it was this good in Italy--nor did my family. The finest is in Florence, with one highlight for me being fresh peach, with bits of peach suspended in the creamy mix. Bravissimo!

Fun stuff and beautifully written, as always. Ya' done good!