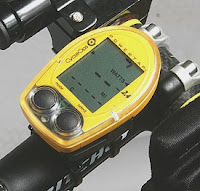 Recently, I purchased a power meter. "What's that?" you say? It's the gold standard training tool for cyclists. It measures in watts the direct output of power applied to the pedals (in this case, through the pedals to the rear hub). "Watts don't lie", is the adage I've heard in cycling circles. Your heart rate, your average speed--metrics like these change based on terrain, fatigue, headwind, temperature, etc. But watts? Watts don't lie. You're either applying a certain level of force to the pedals or not. Now stay with me, non-cyclists. There's practical relevance yet to come...

I don't know about you, but I tend to learn through my mistakes, especially with technology. I drained the battery to my computer head unit for my power meter by leaving it too long in the download cradle. Dead battery. Needed replacement. Check. But what I didn't realize is that every time you replace a battery and freshly pair the head unit with the rear hub power transmitter, you must "zero the torque." How did I know that I needed to do this? Well, one clue was that on a recent ride I was still getting a power readout...while I was coasting downhill. Bad sign! What was worse, however, was what this meant.

It meant that my studly ride earlier that week, the one where I broke all my former records of power output, the one where I was thumping my chest and elaborating on my middleaged fitness to my adoring wife...was suspect. Skewed. Exaggerated. That's tough to take as a middle-aged cyclist. All my numbers were inflated. My performance was not nearly as tremendous as I thought. Probably pretty commonplace. I had to zero the torque.

It's a simple task, really. I found instructions online and it's recommended that this zeroing occur weekly. It insures that your power meter gives an accurate reading--and that you're given no freebie watts (which inflate your ego, to say the least).

Today, I noticed to my great humility that my numbers were significantly lower. Not nearly as studly as I had imagined them to be. Sigh.

"Zeroing the torque"--it recalibrates us to reality and gives us honest feedback based on a higher, objective standard. It occurs to me that this is what happens when we relate to the God of the Bible. For measured against ourselves or even our peers, we may feel that we're doing quite well morally and ethically (thank you very much!). However, this is not the ultimate standard we're given to use in measuring ourselves. The gold standard is God's: perfection, holiness, complete selfless love. This was God's original design for the people God made. How short we've fallen! God, it turns out, requires of us the fulfillment of this original standard, which, left to ourselves is impossible. God, however, offers the perfect fulfillment of these requirements in the obedience of his Son, whose sinless life, sacrificial death, and glorious resurrection allow all who will trust in him to measure up--and, so to speak, hit the numbers.

I guess as humbling as it is, I'd rather measure myself against reality than delude myself in thinking I'm fitter--or even more moral--than I really am. Ultimately, I have this confidence because I live in a reality governed by a good and gracious, albeit holy, God. "Zero the torque"--it's the way to relate to reality...and to become more healthy in the process.