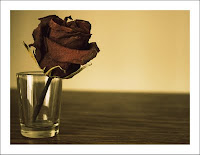 "I am the vine; you are the branches. If you remain in me and I in you, you will bear much fruit; apart from me you can do nothing."
Jesus, in John 15:5

It's been wet and now it's hot in Boulder County, Colorado. Everything's green and the roses out front, despite my brown thumb, are flourishing. We have the mini ones: a burst of more than a dozen in a small handful. I pruned off a spray and put it in a vase on the kitchen table more than a week ago. It's still remarkably well. But as you and I know, it won't be much longer. In fact, it'll wither, grow dry and brown, and the water will turn foul and brackish. That's the way it is with cut flowers. Nice for a short while, then dead and fit only for the garbage can.

How different from their cousins out front, who remain rooted in the front yard! Each morning the sprinklers come on and when one branch of flowers withers, another quickly takes its place. There's renewal and refreshment from their rootedness in soil and sprinklers. It's true: even these roses won't last but a season. But the rose bush itself, rooted deeply in the ground, will survive the winter and return in full flower next summer. That's the way it is with growing things.

And that's the way it is with us. Too often we expect to flourish long after we've removed ourselves from the Source of life and renewal. We live "cut-flower lives"--vital for a season, but subject to withering effects that dry us out and drain us of life. We need to rediscover life in the soil, with roots sunk deep into the rhythms of God. This means rest and refreshment through adequate sleep, exercise, play, and vacation. It means a life-giving, on-going personal relationship with God in Jesus Christ, the "Vine", as he called himself. As he said, we are his branches. Rooted in him, we find vitality, wholeness, hope, and help. We flourish.

But let's be clear: it's not instantaneous. Growing things don't work that way. It takes a while for the life to saturate the branch, for the nutrients to flow into the extremities. There are seasons, too--of flowering and withering, of verdant green and moribund brown. But rooted in the soil, the Life remains--and will triumph over the seasons of time and adversity. Thanks to Jesus Christ, dead but now alive, we too, rooted in him, will die and live again. It's life on the vine. And the great thing is that it's never too late to be grafted back in!

How is it with you? Is it life in the vase or life on the vine? Are you sunk in the soil or sunk in your situation? Let this summer--and the ample illustrations all around us--lead you to Life.

Email ThisBlogThis!Share to TwitterShare to FacebookShare to Pinterest
Labels: -