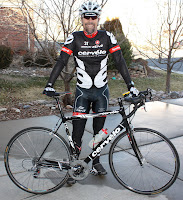 "...You have taken off your old self with its practices and have put on the new self, which is being renewed in knowledge in the image of its Creator...Therefore, as God's chosen people, holy and dearly loved, clothe yourselves with compassion, kindness, humility, gentleness, and patience."
--Paul's Letter to the Colossians 3:9-10, 12

At the risk of seeming cheap and shallow, I begin with a cycling illustration. I've realized that cycling's appeal for me is three-fold: 1) it offers great cardiovascular exercise; 2) I get to do it in the great outdoors and enjoy creation; and 3) it's got cool gear. Today is about #3. Bear with me.

The cool gear piece is fascinating to me. I love the technology of bike design and production. I geek out over measuring my efforts in watts, mile-per-hour averages, beats-per-minute, and gradient percentages. I think the style and traditions of pro cycling, including the cycling kit (uniform) design and function, are intriguing. In fact, I would go further: getting into the cool gear and experiencing its performance advantages is a large part of the fun. It could be just "dress-up and make believe" for this recreational cyclist; or it could be more.

This is where the "more" comes in. When I played tennis competitively in high school, I noticed that those who dressed the part usually played better than those who didn't. Could've been just superficial; but I don't think so. When you feel like a tennis player and look like a tennis player, your commitment to the sport (and often your performance) improves. You dress the part and often you end up living the part.

I think cycling is like that, for me at least. When I'm kitted up and riding my Cervelo, I find myself pushing harder, aiming higher, riding better. I dress like a cyclist; I then find myself riding like a cyclist. There's some connection between dress and behavior--and indeed lifestyle.

I think Paul got this right in his Letter to the Colossians. He urges his readers to grasp the fact that they are--at their core, in the ground of their being--new creations in Christ. Their faith in Jesus and his resurrection has transformed them spiritually and eternally. They aren't the same as before. Everything has changed. Paul then asks them to live true to their new identities: to take off (the metaphor is of undressing) their old selves and habits and in their place clothe themselves with their new selves and behaviors. To the outside observer (and occasionally to those practicing this themselves!) this may seem like "dress up and make believe." A "fake it 'til you make it" practice of Christian virtue. But it's not. If we take Paul seriously (and Jesus more seriously still), this conscious clothing of ourselves in new behaviors reinforces and extends our new spiritual identity. We are new; we dress new; we live new. Our spiritual clothing shapes our actual behavior. We live the part we dress. See the connection?

So, paraphrasing C.S. Lewis in his classic Mere Christianity, don't worry if you don't feel like you love others; act as if you did. And, as as you practice this love, as you "put it on", you will find yourself living it. Dress up and make believe may not be so wrong after all.