"We put down our dog yesterday."

Oh, how many people have said this to me! I've usually murmured, "I'm so sorry." And then I've moved on, thinking to myself, "Well, it was just a pet" (assuming that because theirs wasn't a human loss, it couldn't have been nearly so deeply upsetting or gut-wrenching). Now, I know better.

We put down our dog yesterday.

It happened so fast. My wife and I went to California for a brief visit leaving our boys in charge of house and dog. Like most in her breed, Hannah was a glutton. So when they texted us she wasn't eating, we knew it wasn't a good sign. We thought it was food poisoning or a bug. We returned and, though she didn't seem herself, she was mostly the same--wagging her tail and eager to go on a walk. A day and half later she was worse. We took her to the vet, only to hear some bad news, including an option to euthanize her. I almost dropped the phone. Apparently, she was jaundiced and her liver values were off the chart. Best case scenario: she had a major infection; worst case: cancer. Also, we were shocked to learn she was almost 11 (we had thought 10) and we discovered that 11 is the average lifespan for Golden Retrievers.

Over the weekend she crashed. We put her in an emergency hospital, agreed to more exams and imaging (along with the quickly mounting costs) and then were told she had mere days left. Monday evening we took her home, choosing to make her comfortable and say goodbye. And then...we put down our dog yesterday.

I'm starting to get it now. It occurs to me that many people around me (that jerk cutting me off on the freeway, that grumpy checkout clerk, that sullen teenager) bear hidden losses and grief which I'll never know. Most people, at one point or another, are walking wounded: carrying sadness and stress that the rest of us can't even imagine. Maybe I (maybe we) need to cut them some slack.

The next time I hear those sad words, I'll listen with much greater attentiveness and compassion. And I vow to do something else: I'll let this be about them and their loss. I won't try to say those well-meaning (and terribly wounding) words "I know just how you feel." Because I don't. I didn't live with their beloved pet the way they did. I don't know their emotional bond that's torn and tattered. This is about their loss, not mine. Listen well, Carl.

Furthermore, I won't try to make their loss better by saying, "But (s)he's out of pain and in a better place." I won't try to package and explain and in any way minimize or trivialize their unique grief. I will listen. I will try to reflect what I hear. And I will try to make space for them to be wherever they are. Because these furry loved ones of ours are never "just pets." They're family. Sure, they're not humans; but losing a beloved pet is a deep loss and a window into bigger losses. 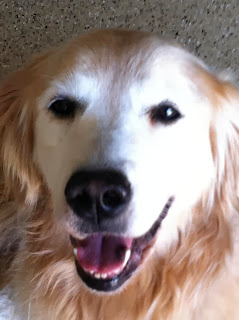 Oh Carl and all of you Hoffmanns, I am so very very sorry! Losing a furry family member is so hard! Praying for you all as you mourn the loss of sweet Hannah! If you need a place to tell her stories our ears are wide open!

Love to you all!
Amy and the other Hansons

Thank you, Amy. That means a lot to us.

A message you can hug. Cloud Pets can send and receive messages from anywhere in the world. www.imb-online.net

I would agree with comments above about ignorance. In the modern world where you do everything with your mobile devices it would be silly not to use for gambling. For instance, I often play mobile slots at 777 Spin Slot portal and enjoy it very much. I don’t have to be stuck at home with PC and can go out and play at the same time.