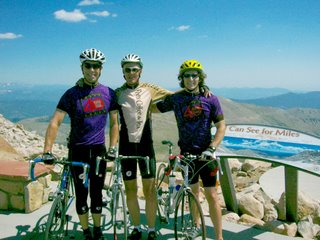 Friday, July 14, 2006 will be a personal milestone for me in cycling. This was the day that two friends (Steve and Forrest) and I conquered the climb from Idaho Springs (7500') to the top of Mt. Evans (14,150') on our bikes. What a great adventure! We rolled out at 7:15a.m. in the cool, clear air and began the climb, an unrelenting 28.2 miles at an average gradient of 5.5%. The first rest stop (and brief it was) was at the half-way mark, Echo Lake, at 10,000 feet. Stepping off my bike, I felt nauseous and light-headed, concerned that these might be symptoms of altitude sickness. Thankfully, they weren't; I'm fairly sure I was just on the edge of bonking. A couple of gels, more Gatorade, and some focused prayer were just what I needed. Past the fee station and up the road to the summit, the views were fantastic--the Continental Divide spread out to our north, Longs Peak further north, Denver in the haze and heat to the east, South Park and Pike's Peak to the south and west. Up above treeline we pedaled as the road became bleached, cracked in places, and undulating. We saw marmots and these tiny mice-like creatures climbing the rocks beside the road. The topography felt like moonscape. The switchbacks careened madly back and forth as we continued to spin at a moderate pace. Interestingly, my heart rate stayed relatively low for the whole climb--I averaged 77% of maximum for the whole ride. Up, up, up we went, passed only by two elite-looking riders. The switchbacks in the last two miles before the summit are deceptive: just when you think you might be there (you can almost touch the observatory at the top), you've got several more switchbacks to climb. Before we knew it, though, we pedaled up the last pitch and into the parking lot, to be greeted by our faithful sag-car driver, Linda (Steve's wife), many sightseers and, believe it or not, a real, live mountain goat! Here we were, atop the highest paved bike climb in North America (if not the world--can you think of a road paved any higher?!). The descent was fast and bumpy on the upper slopes, smooth and speedy down below. It was a great day and one I'll never forget. Thanks for reading.