The Point at the End of the Spear 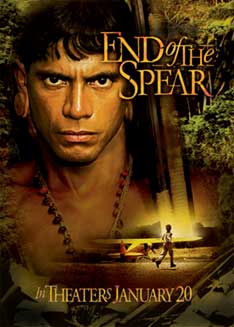 I look for what I call "God-moments" in life. These are moments when my heart is, in the old words of John Wesley, "strangely warmed" by God's presence or activity. I had such a God-moment recently while watching the DVD of the 2006 film "End of the Spear." It's a film about the five U.S. missionary martyrs who gave their lives in the mid-1950s to reach the Waodani people in the jungles of Ecuador. It's a lushly-filmed, restrained account that avoids being preachy or over-the-top religious. The witness of the missionary aviator Nate Saint, who at one point utters the following words to his son Steve, speaks volumes. Steve is anxious about his dad's missionary exploits in the airplane, urging his father to take a gun to protect himself as he reaches out to these notoriously warlike people. Nate's reply to his son hit me like a hammer. Nate explains that his own safety (and the use of his gun) are not necessary: "Son, we're ready to go to heaven; they're not." It floored me...and here's why: Nate's perspective was so thorougly rooted in faith and eternity that he was freed up to spend his life lavishly for a people who didn't yet know the God he knew. Comfort, control, certainty, safety--these were no longer primary for Nate Saint. He was consumed by a vision bigger than himself, motivated by a passion that enabled him to rise above mere self-protection. I was struck to the heart: while I confess formally that I share Nate's faith, I'm nowhere near his kind of freedom and vision. But I'd like to be closer...and freer...and more passionate about eternity, more able to rise above the instinct of self-preservation. I guess I felt pierced...by the End of the Spear.

it is amazing how much we are motivated by self-preservation and fear. and God said that was how it was going to be when adam & eve were banished from eden.

we are constantly reminded in scripture to rise above our fear, yet it can be so difficult. it requires seeing things through the sovereignty of God's eyes.

it also raises the question, "how big is your god." when i see christians get bent out of shape about "the last temptation of christ" or "the da vinci code", i am wondering where the fear is coming from.

this is an interesting lesson in perspective. thanks for the post.