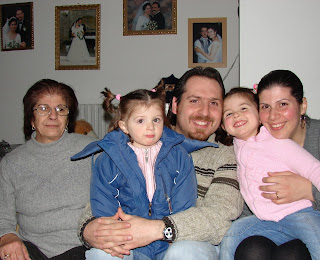 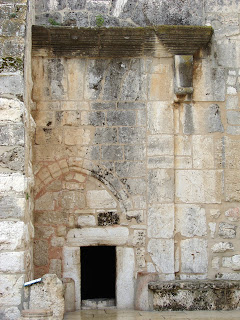 I'd estimate that most American Christian pilgrimages to the Holy Land spend very, very little time among the Arab Christians. This has become especially true since the construction of Israel's security wall in the last several years. With the stereotypes and suspicion running rampant and the hassle of driving through checkpoints, most tour buses want to get in and out of places like Bethlehem as quickly as possible. They may spend all of an hour or two there. I know this is how it works, because in my first two trips to the Holy Land, this is what we did!

It's very easy to go on pilgrimage with organizations that focus almost entirely on the "ancient stones"--the historic, biblical sites. There's great value, certainly, to seeing these places. It's inspiring and moving to almost literally "walk where Jesus walked." This is particularly true in Galilee, which retains such a natural, rural feel, that one feels almost transported back to the time of Christ. Seeing the ancient stones is valuable, no doubt. I love the ancient stones; I relish the stories, the history, the archaelogy. I love the way the Bible comes alive for me and those I teach. Ancient stones are good.

But did you know that there are "living stones" in the Holy Land? The apostle Peter (Petros, literally a "rock" himself!) in his First Letter describes Christians as "living stones" who are being built spiritually into a house of worship (1Peter 2:5). In Palestine and Israel there remains today an indigenous Arab Christian presence, one that has lived in the land continuously since the Book of Acts, Chapter 2. Here we read that among those gathered at Pentecost to confess faith in Christ, were Arabs (Acts 2:11). Not all Arabs today are Muslims! In fact, many Arabs were Christians before they were Muslims (recall that Islam did not arise in the Middle East until the 7th century AD!). Sadly, Palestinian Arab Christians in the land are dwindling dramatically; many of them have been forced out by the founding of the modern state of Israel and by the hardships imposed by the occupation since 1967. As a result, in places like Chile, Michigan, and elsewhere there are large numbers of Palestinian Christians. But in the Holy Land there still remains a solid, faithful presence of Arab Christians, whose faith in Christ is strong and moving.

I'll never forget the conversation I had with George, the director of the Holy Land Christian Ecumenical Foundation ministry in Bethlehem. George and his family had lost literally hundreds of their ancestral olive trees to the Israeli security wall built against their will on their property. These olive groves were the family treasure, their livelihood for generations. Palestinian attachment to the land and particularly to olive trees, is legendary. As one of them told us half-jokingly, "We lavish more attention on our olive trees than we do on our children!" To have these trees destroyed against one's will, to lose literally thousands of dollars of present and future income in an unjust, illegal act like this, would make one furious, I'd think. Bitter, angry, resentful, even vengeful. But this wasn't George at all: George, as a Christian, knew of Jesus's commands to forgive and to love one's enemy. There wasn't a trace of bitterness in him. I got the impression he held loosely to material things, refusing to let his spirit be embittered. He had a twinkle in his eye and a light step. I couldn't believe it. His was a resurrection faith, a miracle of grace and forgiveness, a new life rising from death and destruction.

"Why do you seek the living among the dead," said the angels to the disciples who visited Christ's empty tomb on Easter morning. "He is not here--he is risen!" When we look for Jesus Christ today, we will not find him among the ancient stones. Those stones are dead. Christ, on the other hand, is alive--alive among the living stones, his people, his Body, the Church around the world--including Palestine.