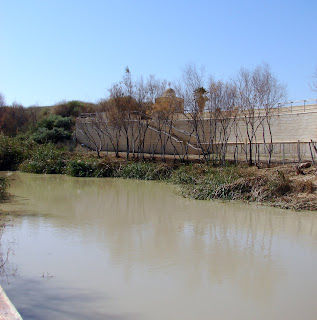 Another "aha" moment for me came early in our pilgrimage on the east bank of the Jordan River. It was at the site where John the Baptist baptized Jesus (see John 1:28). Previously, we'd learned that within a short distance from here the Israelites had crossed over into the Promised Land under the leadership of Joshua some 1200 years earlier (Joshua 3:16). Without a doubt, this part of the Jordan was known to John and Jesus as a place of famous crossings, a spot where people were marked with water as belonging to God, a location where the promised rest was made possible, a setting where a homeland became a reality, where wilderness and wandering gave way to rejoicing and homecoming.

I believe Jesus and John chose Bethany beyond the Jordan for its historic importance. Here, in the waters of baptism, a new people were being made ready for God--and a new Joshua (Y'Shua, Jesus) would lead them. In Jesus, all human beings were invited to become part of an expanded, trans-ethnic people of God, ushered into God's long-awaited rest, welcomed home into a promised land that knows no geographic bounds. Once again, we have an example of the Fifth Gospel (the Land itself) communicating a fullness to God's message that is only hinted at in the other four.