Time Between the Times 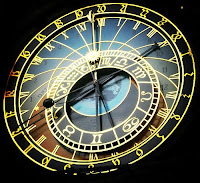 I'm musing on time this morning. It struck me yesterday that in this new year, I will have been graduated from college for 25 years. Ouch. Times blurs by. Watching my 15 year old outstrip me size-wise is disorienting. I don't feel middle-aged, but I guess I am.

I've just finished Larry Dossey's The Power of Premonitions (Dutton, 2009). He's the MD internist researcher who's studied the effects of prayer and spirituality on health. In this most recent book he looks at that strange phenomenon of foresight--those impressions and dreams we often have that seem to come true. Towards the end of the book he muses, with the help of astrophysicists, on the nature of time. According to them, no one's quite sure how to define "time"! Apparently, at the beginning of creation, there were more dimensions than our current four (which include time). There may have been as many as eleven, which collapsed into those four shortly after the Big Bang (or whatever event began reality as we know it). There may be, if I understand them correctly, "worm holes" which lead into different dimensions--and linear time, as we know it, may be only apparent, not ultimately real. Woah.

Whether Dossey et all are correct, I have no idea. I do know that I've had several premonitions, some of which have been powerful and accurate. It's hard to explain these and Dossey does a good job reflecting on the large amount of research done on these phenomena. One thing I do know is that our God is above and outside time as we experience it. I also suspect that Christ's resurrection and his anticipated return at the end of time to judge all humankind and then create a new heaven and earth will blow apart all our notions of time. (See the Book of Revelation--not "Revelations", please--chapters 21 and 22.) Connecting to our timeless God through faith in Jesus Christ lifts us into a timeless reality which will carry us beyond this mortal life and into life eternal--life without suffering and death. Now you really need to read some of my all-time favorite Bible verses: http://bible.oremus.org/?ql=128586871

Which brings me to this time between the times we call "Advent." This year's cycle ends soon and it's our annual reminder that we Christians live between the two comings of Christ and that time as we know it is boundaried by greater realities than the clock and calendar. Our link to Jesus Christ in faith, especially his new life which seeps slowly into our being daily as we walk after him, leads us into time beyond time. What does it matter if we age and die, provided we are moving closer each day to reality itself? Each day on earth is another opportunity for us to affirm his truth and power, his victory over death, and his second coming which will make all things new. Yes, time passes. Our bodies age. But there's much more to time than this. Viewed in the light of Advent, Christmas, and Easter, aging isn't the unwelcome intruder it appears to be. Temporal time is our reminder that time itself will be transformed by the arrival of Jesus. Til then we wait. Blessed Advent to you...and Merry Christmas.

Worms holes... hummm... An as I grow away from middle age, I find such comfort in His promise. What a blessing I received 5 yrs. ago and how it comforts and guides me as I walk this late in life walk with my mother... not in fear but in eternal hope. Just doesn't get any better than this! And Carl... it's a trainer day... don't you think :)

Someone told me that time is God's way of keeping everything from happening at once.

More seriously, your musing seems in line with the theologians who tell us that we shouldn't think of God as just having created in the past and pushing us from behind, but more as standing in the future and inviting us forward, beckoning us and all of creation toward His eternal future. And calling and enabling the church to live as a foretaste of that future. Good stuff to think about as we celebrate a key occasion when God's future broke into our present in the form of Jesus.

Carol and Allan,
Thanks for your thoughts, heartfelt and insightful. Time is an amazing (and amazingly slippery) concept, isn't it?
Merry Christmas!
Carl

When you die, you are worm food. You are here, you are now and that is all. You know nothing about heaven and how it works, yet you waste your life on a devotion to a sick god in the hope that you reach it.

We devote ourselves indeed to a sick God, a dead God, a God who became worm food himself ... But then trashed sickness and death to return and toast bread and grill fish over an open fire on the beach at sunrise for his best friends. I live for today only because one day I'll see that loving recognition and smile of welcome myself as I feast at the table he's prepared for me. Thanks for this post, Carl.